By Max Mitrovic. Last Updated On 5th May 2022. On this page, you will find a detailed case study that is based on a real-world example of a successful claim. In this case, a woman who got stuck in a lift made a personal injury claim as she suffered a psychiatric injury through no fault of her own and received £23,000 in compensation.

Once you have finished reading this case study, you may believe that you have a similar reason to make a claim, or you may simply have some questions about the process followed when making a claim. Either way, speak to one of our claim advisors on 0800 073 8804. They will be able to help you further.

How Was The Claimant Trapped Or Stuck In A Lift? 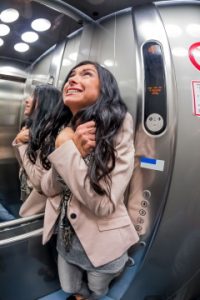 Stuck in a lift

The original news piece that reported this claim, was published by The Sun in 2016. We are going to explain the information that was published, and also take a look at the way the claim progressed, why the victim received a settlement after making a stuck in lift claim.

A general overview of the claim would be that in this case, a woman was shopping in a shopping centre, and became trapped in a lift with her young son for over four minutes in total. She was awarded a settlement of £23,000 in compensation by the courts. The amount she was awarded related to a previous psychological illness she had suffered as a child.

The victim suffered a direct psychological injury due to childhood memories of claustrophobia. A CCTV recording from inside the shopping centre showed the lift was stuck for just over four and a half minutes. The victim entered the lift with her son, and it stopped moving almost right away. She pressed the alarm bell and was released a short time later by a member of staff.

What Injury Did The Claimant Suffer After Being Stuck In A Lift?

According to a psychiatrist, the victim now suffers from panic and anxiety attacks after being trapped inside the lift. As the woman had suffered from claustrophobia as a child, memories relating to this time brought on suffering.

The claimant told the court that since the lift incident, her life had been negatively affected. For example, she was no longer able to use fitting rooms in clothes shops, and she had to use her bag to prop the bathroom closed as she feared locking them.

What Is A Direct Psychiatric Injury?

A direct psychiatric injury, is any psychological injury that is caused by a single event or experience that resulted in mental trauma. The actual psychological damage can be any mental illness or disorder, such as post-traumatic stress disorder.

A psychological injury within torts law will mean mental trauma that has been inflicted upon a person in which they may go on to make a personal injury claim for as it happened due to negligence, a breach in the duty of care.

The fact that the women, in this case, suffered severe stress and trauma due to a specific incident which could have been avoided allowed her to go on to make a claim for damages. The sudden event had clearly provoked past memories and allowed them to manifest again within the psychological well being of the victim. If the woman had not been trapped in the lift she may not have had to relive a previous condition she had once suffered from.

For people who suffer a direct psychological injury due to an incident caused by third party negligence, a personal injury claim could be possible.

How Common Are Lift Accidents?

This section is based on data that was made available in 2010. It, therefore, maybe a little out of date. It does, however, give a good indication of how common lift accidents use to be.

In 2010 the Lift and Escalator Industry Association (LEIA) estimates there are 250,000. This included both passenger lifts and goods lifts. Between 2002 and 2010, the Health and Safety Executive figures show there were 266 individual people that were injured in lift accidents and four fatalities.

On top of this, a further 182 injuries were caused by lift related infrastructure such as hatches, service ducts, crawlspaces and lift shafts.

The data for this section was taken from the BBC website:

Both the UK Government and the Health and Safety Executive have published plenty of information related to lift safety either at work, or in public places. The legislation that this information is based on is something that every premises owner/operator in the UK has to adhere to.

When these regulatory requirements are not met, and this results in an injury to a member of the public or an employee at work, then if the injured party can prove that a third party was to blame, it could be possible to claim. This includes compensation for physical injuries, and also stuck in a lift compensation for direct psychological injuries such as the one this case study was based on. A personal injury solicitor would be able to help you with such a claim.

How Much Compensation For Being Stuck In A Lift And Psychiatric Injuries Was The Claimant Awarded?

In this section, we will take a look at how much compensation for a psychiatric injury was awarded to the claimant in the case study, and why. In general, psychiatric injury compensation amounts are driven by the severity of the mental harm the victim suffers. The award takes into account the fact that the incident had provoked past psychological suffering and for this case the woman was awarded 23 000.

In her youth, the claimant had suffered from claustrophobia. In her later years, she had overcome this difficulty and was living a normal life. However, as a direct result of being trapped in the lift, her claustrophobia came back. She found that she was unable to stand small, closed spaces such as a public bathroom, and changing room facilities.

The fact that the victim was trapped for a matter of minutes did not play a part the significance here was that she had to relieve mental issues she had recovered from and now her daily life and routine suffered as a consequence. This is why a total of £23,000 in compensation was awarded.

It is virtually impossible to come up with every psychiatric injury compensation payout. Each injury and each claim are unique, making it very hard to calculate an average, as no two payments are made for the same reasons. You can use this table below though, which is based on the actual Judicial College Guidelines used by the court to value injuries. It shows possible compensation ranges for different kinds of psychological issues. This figure is known as general damages.

You might be able to find an online personal injury claims calculator that can estimate the value of your claim for you. However, if you want a more accurate estimate of the compensation amount you might receive, you will need a solicitor to value your claim for you. To facilitate this, you will need to go for an impartial medical examination to demonstrate how bad your injuries are/were. If you want some free advice on how to go about this, please speak to one of our claim advisors today.

More Payouts for Stuck in the Lift Accidents

Other financial losses you may be able to claim for as part of your stuck in the lift compensation claim might include:

Evidence is needed to successfully receive special damages compensation. This can include bank statements, receipts, invoices and payslips.

To learn more about payouts for stuck in the lift accidents, please contact our team of advisors for legal advice that is completely free. If you have any queries about the claims process, you can contact us at any time.

A great way to minimise the financial risks when you make your claim is to use the services of a lawyer that will handle your claim under a No Win No Fee deal. In this situation, you don’t have to pay the lawyer’s pre-agreed fee until they have secured you a compensation settlement and received payment for you. This is when the fee is automatically collected, and you are given the remainder.

This means no fee to begin your claim, no fee to process your claim, and no fee to your legal team if the claim isn’t a success. If you would like to know more about how this fee structure works, please call our claims team. A claim advisor will go over just what No Win No Fee means with you.

We have a very simple way for you to get the legal help you need when you need it. Just follow the three steps below:

We believe that our simple new claims process makes it easier for claimants to get the claim underway quickly, with minimum fuss.

Start Your Claim For Being Stuck In A Lift

Do you believe you have a valid claim for being trapped in a lift? If you do, Contract our claims team on 0800 073 8804. They will answer any questions you have, talk to you about compensation payouts and how much you could be able to claim, and provide vital information such as the personal injury claims time limit that will apply.

What happens if you get stuck in a lift?

You could be affected in a few different ways if you are stuck in a lift. One example could be the development of certain psychological issues. For instance, you may develop claustrophobia as a result of the incident.

Alternatively, if the lift comes to an abrupt stop or falls suddenly, then your injuries could be physical. It’s important to remember that you can claim for psychological injuries too, not just physical ones. In some cases, you may even be able to claim for both.

You may be invited to an independent medical assessment and/or psychiatric evaluation so the extent of the damage can be properly recorded. You can present these assessments as evidence to support your claim.

Can I get compensation for getting stuck in a lift?

Yes, but you must be able to prove that the incident was caused by someone else’s negligence. For example, the lift may not have been serviced for a very long time.

You also need to have been injured due to the incident. These injuries could be physical, psychological, or both.

You may also like to read these other guides: