HGV or Lorry Accident Claims – How Much Compensation Can I Claim?

Heavy goods vehicles (HGVs) are now a mainstay on British roads. These lorries and trucks are among the largest vehicles on the road, measuring above 16.5 metres (in the case of an articulated vehicle) and 18.75 metres (in the case of rigid vehicles towing a trailer). In 2015, the last year for which the British Government provides statistics, domestic freight activity increased by 12%, rising to 152 billion tonne kilometres. Given how many HGVs are now on the roads, as well as their size, accidents involving these vehicles can be incredibly serious.

If you have been involved in an accident with a heavy goods vehicle or lorry you may be entitled to compensation for any injuries or damage sustained. However, in order for you to find out if you could receive compensation for your accident, you will need to make a compensation claim under the guidance of a Claims Advisor.

A Guide to HGV and Lorry Accident and Injury Claims

This guide exists to inform and assist you with your personal injury compensation claim for an accident with a HGV or lorry. It will provide you with comprehensive and accurate information regarding the potential issues that you will need to consider before making your claim and how to begin the process of making your claim in order to receive compensation for your injuries.

The guide will present you with the actions that you will need to take if you have been involved in a lorry or HGV accident. It will deal in matters of responsibility, the prospect of non-British vehicles being involved, the ways in which compensation claims are calculated, and advice on how to seek legal assistance. We’ll also take a look at an example of a compensation claim in order to better illustrate the legal complexities.

If you believe you may be owed compensation for an accident involving a HGV or lorry, then this guide should be the best place to get started when making a claim.

Who is Responsible for an HGV or Lorry Accident?

When you are considering a compensation claim involving a HGV or lorry accident, one of the first things you must consider is who is responsible. Legally speaking, when considering such an accident, responsibility for the accident stems from the idea of ‘negligence’ and whether the accident occurred due to negligence on the part of the driver or the operating company itself:

Claiming Against the HGV or Lorry Operator

If you have suffered an injury as result of an accident that involved a HGV or lorry then there is a good chance that you will have to make your compensation claim against the operator of the vehicle. However, the process of making this claim changes depending upon whether you are making a claim as a member of the public or an employee of said operator:

What to Do If You Are Involved in an Accident with an HGV or Lorry?

If you are involved in an accident involving a HGV or lorry, you should first make sure you report your accident to the police and record the driver and operator’s information. Seeking urgent medical attention should be one of your primary concerns. Once you have done so, you can begin gathering evidence to support a possible compensation claim:

How do HGV and Lorry Accidents Happen?

Accidents involving heavy goods vehicles and lorries occur relatively often in the UK, as many as 17 a day across the United Kingdom, according to a report on HGV accident statistics issued by the Department of Transport. These accidents can occur for a number of different reasons, both as result of the driver’s and operator’s actions:

How to Begin an HGV or Lorry Accident Compensation Claim

When you want to begin a compensation claim for an accident that involves a HGV or lorry, the process is made much simpler through the use of our company’s Claims Service. We will provide you with the support necessary to get you through this stressful time and ensure that you receive the maximum possible compensation for your accident and the attendant costs. 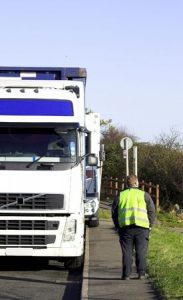 As previously mentioned, the first step should involve gathering the necessary evidence to support your claim. This could include almost anything, such as witness statements, medical reports, and photographic evidence. Particularly in the cases of accidents that involve either a HGV or lorry you will also need to record the name of the driver, the number plate or the vehicle, and the operating company.

The next step you should take is to contact legal representation. If, for example, you choose to work with our law firm, we can offer a free consultancy session to help you navigate the initial stages of your claim. In this consultation session, we will assess how valid we believe your compensation claim to be and honestly evaluate its chances of being a success. A large portion of this will depend on the evidence you are able to provide, which should give an indication of why it is so important.

If, after this session, you choose us as your Claims Service, we can proceed with your compensation claim. This will include completing further fact-finding by looking at CCTV or arranging local medical assessments to evaluate the severity of your injury.

Then we will take your claim to court and, thanks to our ‘No Win, No Fee’ policy, we won’t charge you legal fees until we are successful in arguing your case.

Can I Claim Against Foreign Drivers?

According to the Accident Exchange, over 1000 accidents happen annually that involve a non-British HGV or lorry, a number which rose by 100 in the period between 2012 and 2015. Even if your accident with a HGV or lorry involves a non-British driver, you might still be eligible for compensation in cases where negligence can be proven.

The only real difference between making a claim against a non-British driver is that these cases will be represented by the Motor Insurance Bureau should the defendant have no native-based insurance. However, this does not have any significant effect on the potential success of your compensation claim and is unlikely to alter the process in any significant fashion.

What can be Claimed for after an Accident with an HGV or Lorry?

When you have been injured as the result of an accident, the extent of the damages you can claim depends heavily on what expenses you have incurred. Most people who make compensation claims underestimate the number of different expenses that can be claimed, normally focusing solely on medical costs. However, you could claim compensation for a number of costs. These include (but are not limited to):

These costs highlight the number of different ways in which you can claim compensation in relation to your accident. However, the key factor behind how much compensation you are determined to receive stems heavily from the severity of your injury.

How Much Compensation will I get for an Accident with an HGV or Lorry?

The amount of compensation that you could receive for an accident involving a HGV or lorry varies upon two main factors, namely the type and severity of any injuries that you have suffered and the damage to property that has been caused by the accident.

Here are the average lorry and HGV accident compensation amounts that you could receive as part of your claim, organised by type and severity of your injury:

As you can clearly see from the table above, the type and severity of your injury has a massive impact upon the amount of compensation that you could receive as result of your accident.

If you still believe that there is no point in filing a compensation claim for your accident involving a HGV or lorry then simply read on to learn about a real example of someone who has already gone through the process.

In 2007 this claimant was involved in an accident with another HGV while on the motorway, leaving them with permanent injuries and medical treatment that continued over the course of two years. The claimant then attempted to claim compensation in 2009 for the accident, citing that the other party failed to leave enough breaking room.

This shows you the possible outcomes of your compensation claim. Although this can obviously be seen to be an outlier for compensation amounts, if you never make your initial claim then you will never know how much compensation you could receive.

No Win No Fee HGV and Lorry Injury Claims

The worst part of making a personal injury claim for an accident with a HGV or lorry will be the potential legal fees that you could be charged for attempting to get compensation.

These legal fees may be charged against you by your Claims Agency and can cause incredible damage to your finances and mental health. If you are already experiencing financial issues as result of your accident then such fees can appear excessive and extortionate, hurting you when you are at your most vulnerable. Even worse, your fees may even exceed your compensation and leave you at a loss.

This policy, also called a ‘Conditional Fee Agreement,’ ensures that we will do our best to win your case, rather than bleeding your dry while trying to extent the case for as long as is possible. We promise to only charge for our services on the condition that we win your compensation claim in court; if your claim fails, you won’t have any legal fees or debt to add to your worries.

Why Choose Us as Your Claims Service after an HGV or Lorry Accident?

When you decide to make your personal injury claim after your accident involving a HGV or lorry, you need the strong support of our company as your legal representative.

Our years of experience in dealing with personal injury claims places us as one of the most capable companies for dealing with claims for accidents involving a HGV or lorry. It has enabled us to gain a deep understanding of how to maximise your chance of being successful in your compensation claim and your potential compensation amount.

Our team of legal experts will ensure that your personal injury claims dealt with efficiently and professionally both in and out of court. They can assist you in your claim along every step of the process, and give you premium advice on how to proceed and receive justice for your accident.

Our desire to see justice done in the world is highlighted by our ‘No Win, No Fee’ policy. This emphasises our company’s commitment to justice, especially for those who believe that cannot receive it due to their financial status, and limits the amount of stress that you will face throughout the claims process. We can even arrange for a local medical evaluation to strengthen the evidence you have in support of your claim.

In short, we are by far the best company for dealing with personal injury claims and you should choose us as your Claims Service.

Call for Free Advice and To Start a Claim

Call 0800 073 8804 now, and our company is able to provide you with free advice on how to proceed with your claim and how much compensation you could receive as result of your accident.

Statistics Soar for HGV Crashes: Safety Strategies under the Spotlight

How Much Compensation For Car Accident Claims?

How Much Compensation For a Cycling Accident Claim?