This case study looks at the reason for a £28,000 compensation pay-out for a broken tibia following a motor vehicle accident. 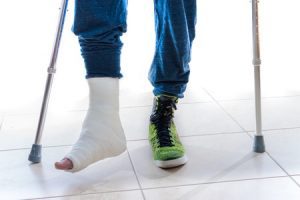 The claimant, a young man of 26 years old, was riding his moped to work one morning when an oncoming vehicle swerved into him, knocking him off the moped.

The victim sustained severe injuries in the accident, including a fracture to his tibia, although the extent of this injury was unknown initially. Whether it was a serious tibial shaft fracture or a minor tibia hairline fracture. Regardless, cracked tibia recovery was likely to be long in either case.

The victim was taken to hospital by ambulance and had to have three separate surgeries to treat the severe injuries he had sustained. The fracture itself required pinning and bolting, with skin grafts to remove scaring. This process took 2 weeks during which time the victim was fully hospitalised. The final surgery took place a year later to remove the surgical fixings as the final stage of his broken tibia treatment.

In the long-term, the victim was left with scarring to his left leg and he also had to undergo a lengthy period of physiotherapy treatment in order to begin walking properly again. This lead to a very long broken tibia recovery time.

How Common Are Vehicle Accidents in the UK?

According to statistics published by the UK Government, casualties caused by road traffic accidents are very common in the UK. IN 2016 alone, we see the following numbers:

However, it should also be noted that a fractured tibia is also often caused by sporting related injuries, from something as simple as an amateur football player going on for a bad tackle, to more exotic situations such as a golf buggy accident.

When we look at tibia fracture symptoms, they differ depending on the severity of the injury. For example, hairline fractured shin bone symptoms are different to those of tibia (shinbone) shaft fractures.

In this particular case the key symptoms were more severe than a simple fractured fibula as the injuries sustained were:

Due to the seriousness of the injuries sustained the tibia fracture healing time was long and painful.

With regards to this tibia bone fracture claim, the other driver was blamed. The insurers of the party in question admitted liability in the early stages of the case. However, due to the very long broken tibia recovery time for the victim, it was impossible to judge the full extent of the claim initially.

The victim was in full-time work when the accident took place. Due to taking several months off work due to the injury, upon his return to the workplace, he found he was now unable to complete his general duties as he had done previously.

Ongoing pain and additional treatment meant that the victim had to find other, less strenuous work at a lower pay grade. This too made part of the allegation, in the fact that the other driver had caused this situation.

In this specific case, the answer to the question, how long does it take to recover from a broken tibia? Was an extremely long time. Due to this, it was required that the insurers of the other driver make regular payments to the victim during his recovery. Once the whole claim was made, it came to a total of £28,000. This was broken down thus:

If you have suffered a serious injury in a motor vehicle accident that was caused by a third party, you may be able to claim compensation. The best way to do this is to use a firm of No Win No Fee solicitors to press your claim.

If you have recently been the victim of a motor vehicle accident, and have suffered from a broken tibia you may feel you may have a valid reason to make claim compensation against the driver who caused the accident. If so, then contact us today on 0800 073 8804. Once we know the details of your claim, in most cases we will offer to take on your claim under a No Win No Fee agreement.

A guide to the level of compensation that can be claimed for a range of broken bone injuries.