In this case study, we take a look at a serious broken fibula injury that was sustained by a young man in a motor vehicle accident as he was riding his moped to work early in the morning. 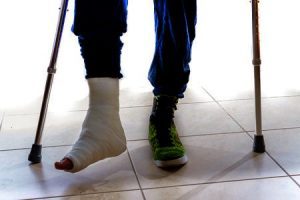 A vehicle heading in the opposite direction swerved across the road into his path, and the subsequent collision caused him to fall off. The young man suffered a severe fibula fracture and soft tissue injury to his arm and leg. Furthermore, during his recovery from the injuries he was found to be suffering from Post Traumatic Stress Disorder (PTSD) caused by the accident.

After a long-winded and complicated claims process, the victim was awarded a total compensation pay-out of £46,000.

The young victim was taken to the hospital in an ambulance, and upon arrival, it was found that the fracture of his fibula was serious. So serious that he had to spend several days as an in-patient and undergo several surgical procedures.

During these surgeries, the bones of the fibula and tibia were physical joined together using surgical fixings including pins and screws. Once this surgery had been completed skin grafts were needed to help prevent significant scarring.

A year later the victim had to return to the hospital for a final surgical procedure that removed the surgical fixings. Despite this significant level of treatment, the victim needed a long course of physiotherapy to regain full functionally. Additionally, the scarring to his leg and calf required cosmetic surgery to remove it.

As can be seen from the section above, the fracture injury was a serious one. However, this was not solely the extent of the injuries the victim sustained in the accident, the full list of injuries was:

Although the driver of the other vehicle admitted liability very early on in the claims process, it was not entirely clear for some time just what they would be liable for.

Aside from the physical injuries, as with man work injury compensation case studies, the claim would likely include some level of special damages. This was because the victim had to spend a lengthy period away from work, and when they did return, found they were unable to continue with their regular duties. Because of this, they had to seek alternative, lower paid employment.

As with many road traffic accident compensation case studies that cover a very serious accident, the actual compensation paid was for a number of reasons. An in this specific case small personal injury cases settlement amounts were paid to the victim in the interim until the full compensation amount that would be sought could be discerned. The factors taken into account for the entire compensation amount of £46,000 were:

You could use a shoulder injury compensation calculator to try and find out how much compensation you might get for a personal injury. However, you are far better off talking to a live solicitor as they will be able to give a much more accurate prediction of broken leg compensation payouts.

If you have recently been unlucky enough to be involved in a motor vehicle accident, and you have suffered from a personal injury such as a broken fibula you may have a reason to make claim compensation against the driver who was at fault. If so, then call us today on 0800 073 8804. Once we have taken the details of your claim, in most cases we will offer to take on your case under a No Win No Fee agreement.