I Was Injured At Work During My Probation Period – Could I Claim Compensation?

I was injured at work during my probationary period – what are my rights and could I make a claim? This could be a more common problem than you might think. Many people could be injured at work during a probationary period, and some could be their employer’s fault for lack of training, poor instruction, poorly maintained equipment or unsafe workplaces, but some employees may do nothing about it, as they may fear that they could lose their job if they seek compensation for their injuries. The law says otherwise. Within the below sections, you’ll see information about your rights as a worker, what kind of compensation you could claim, and how Legal Expert could assist with injured at work during a probation period claims. Call 0800 073 8804 to begin a claim today, but do read on first to see if your situation could lead to a claim. 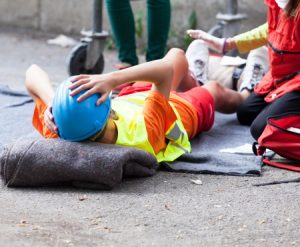 Injured at work during probation period

There are a lot of things your employer must do by law to ensure you are able to do your job safely and with foreseeable risks reduced as much as could be deemed reasonable. This could include them ensuring they are providing employees with health and safety training, the right protective equipment and maintaining a safe workplace. If they fail to do so, and you are injured as a result, they could be in breach of health and safety law, and you could look into making a claim for injured at work during my probation period compensation.

Within the below sections, we’ll explain all about injured at work during my probation period claims, covering your rights as a probationary employee, what your employer can and cannot do to dismiss you during this period, and how Legal Expert could help you make a claim.

What Is A Probation Period?

A probation period is considered a trial period, where an employee gets to work on a job they would like to do permanently, to see how they like the job and how the employer thinks they will do in a permanent role. At the start of the period of probation, an employer should outline their expectations of the employee, as well as going through the standards of work, the standards of attendance, the behaviour expected, and the development they will provide if required to help the person do the job safely.

When Might You Be On A Probationary Period At Work?

Probation periods generally apply to new employees or those that have changed role within the company entirely. While interviews and applications can show an employer what an employee has to offer on paper and by what they say they can do, this cannot be seen fully until the employee has actually done the job or slotted into the team. Generally speaking, probation periods are between 3 to 6 months, with reviews to address any concerns and issues regularly throughout – although this is not compulsory. Probationary periods generally appear to work well for both employees and employers as they get the opportunity to try things out before committing to a permanent role.

What Are My Rights During A Probationary Period?

If you are saying ‘I’ve been injured at work during my probation period” you may feel like you would have no rights. However, this is not the case.

Do probationary employees have rights?

Yes, they certainly do. From the very first day you begin your employment, your statutory rights come into play. However, your contract may afford you more unfavourable terms while you complete your probation. Your employer may have written into your probationary contract

Do probationary employees have rights to minimum wage etc?

You do, however, have statutory rights in terms of employment that must not be breached including

My probation ended but no confirmation has been sent by my employer – have I passed?

In terms of whether or not you are confirmed to have passed your probation period, if your employer does not inform you whether you have passed or failed the period, then in terms of your legal rights, you would be right to assume you have passed and could be considered a full employee.

Are you entitled to sick leave during probation?

You are entitled to minimum entitlements in terms of accrual of sick leave and annual leave. If your employer does not pay you sick pay when you are injured at work during a probation period and it was not your fault, you could claim lost wages back if you put forward a successful claim.

Unfair Dismissal During A Probationary Period

Unfair dismissal during a probationary period could be claimed for instances where:

When Could You Be Dismissed During A Probation Period?

Can you let an employee go during probation? In certain situations, yes. There are a variety of reasons for an employer to effect dismissal during a probationary period. These could include:

However, the most commonly used reason for dismissal during probation is because the employee does not have sufficient skills for the job.

However, being injured at work during a probation period if it was not your fault could not be used as a valid reason for dismissal.

ACAS advises that if a dismissal were to take place, the statutory period of notice of one week if the employee has been employed for at least a month exists. If the employee has been employed less than one calendar month, then no notice is required, although good business practice would be to give some reasonable notice. In addition, good practice for dismissal during the probation period could take the form of:

In terms of an employee having to take time off sick due to recovery from injury or illness, an employer should take steps to ensure that they provided reasonable adjustments to help an employee recover from work if they have a disability. They should also conduct some kind of assessment to identify if the disability or illness is work-related.

Injured At Work During My Probation Period Compensation Calculator

In terms of looking at a personal injury claims calculator, it could only ever provide a rough estimate of what you’d be likely to receive for your injuries. However, we have chosen to look at the Judicial College’s guidelines to outline the brackets for certain injuries. Please note, if your injury does not appear here, don’t worry, you could still claim for it. Just call us and we’ll give you the guideline amount for the specific injury you’ve received.

What Else Could My Personal Injury Claim Compensate Me For?

Not only could an injured at work during a probation period claim bring you a settlement for the injury/ies themselves, but also you could be compensated for the costs associated with the injury, such as:

If you are not certain that some costs you’ve faced would be covered in an injured at work during a probation period claim, then why not call us – we’d be happy to discuss this with you.

If you’re left financially worse off due to being injured at work during a probation period, you may consider shelving plans to make personal injury claims because you may fear you would not have the money to do so. This is where no win no fee really comes into its own. You would not need money upfront to retain the services of claiming for being injured during a probation period. In addition to this, the lawyer’s fees would be paid from the settlement you were awarded, as a percentage of that, so you would not have to find money to fund your claim -as it would be part of your award.

Using an expert personal injury lawyer provided by Legal Expert could be just what you need not only to fight for compensation on your behalf but fight for the maximum payout possible for your personal injury claim. If you had an accident at work during your probation period, then our helpline on 0800 073 8804 could provide free legal advice on making no win no fee claims for being injured at work during a probation period. You are under no obligation to take the advice, or even use our service, but we could be in a great position to provide you with a highly experienced personal injury solicitor that has the knowledge and the experience in workplace injury law to fight your corner.

Below, we have collated some links to other useful guides and resources. We hope you find them useful.

Injuries from work – A general guide -This guide covers a number of situations where you could have an injury because of work, and what to do about it.

Your rights after a work accident – Information about your rights could be covered here.

HSE Statistics for 2017/18 – Workplace statistics can be seen here.

Information about sick pay at work – You can see the government’s resource on SSP here.