How To Claim Compensation Against French Lorry / HGV Driver? – View Our Guide

Can I Make A Claim If Hit by A French Truck, Lorry, Or HGV In The UK?

Driving on UK roads is something many of us do without a second thought, and we don’t expect to be caught up in an RTA or be hit by a French HGV. However, it is now a reality that many different nationalities of driver and vehicle drive on UK roads daily. Whilst many do so without any issue, it is estimated that due to translation issues and problems with adapting to UK roads and road rules, approximately 18 thousand accidents per year are caused by foreign drivers. 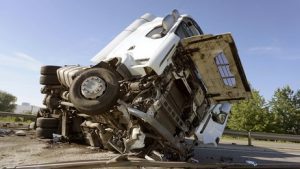 If you have been hit by a French HGV and are wondering if you have any way of gaining compensation for your injuries and damage to your vehicle, you will be glad to know that there is a way forward. Here at Legal Expert, we’re delighted to help people just like you claim the compensation you are entitled for in a crash that was someone else’s fault. Just call 0800 073 8804 for a Legal Expert consultation, or for free legal advice you can depend on. But before you do, read on to find out more about Hit by French lorry claims.

A Guide to Compensation Claims involving a French HGV, Truck, Or Lorry Accident

Whether you’ve been a pedestrian that has been injured by being hit by a French HGV, or you’ve been another road user that a French HGV has run into, you’re likely to be feeling a little shell-shocked. There will be damage to your person and the damage to your vehicle to consider, as well as the financial implications of having time off work to recover. You might feel aggrieved and think there is no comeback on this because the driver was a French national, but if you are thinking this, you might well be mistaken. We can help you to make claims for compensation for both mental and physical injuries you may have suffered as well as supporting you throughout the process. We can also provide you an experienced RTA injury lawyer that can fight your corner and make sure you receive the compensation payout that you are entitled to.

In order to make a claim against a French HGV that has hit you, the vehicle has to be registered in the country. The driver’s nationality is not important, and neither is the country that owns the vehicle. It only matters where it is registered. If it registered in France then it comes under the green card agreement, which is a reciprocal agreement between many different countries that requires a minimum level of insurance cover to be taken against that vehicle should it drive in any of the member countries.

What Is a French HGV, Lorry, Or Truck?

A French HGV, Lorry or truck is one that has been registered in France. The differences between different styles of vehicles can be many or varied but an HGV or large goods vehicle is classed as one that has combined gross weight of 3.5 tons. It could include:

Whatever type of vehicle you’ve been hit by, if it were registered in France, you should look into making a claim with our specialist advisors. We can walk you through the process, and ensure you get the service, and the compensation that your claim deserves.

What Is the International Green Card System?

As mentioned previously, the green card system intends for all its member countries to ensure that vehicles crossing borders are insured to a minimum level. The system, that has many member countries including all EU countries, many in the EEA, and even Russia, some Med bordered countries and some Middle Eastern members, exists to ensure that if there is some accident involving a vehicle registered in a member country, there will be insurance for the person/s injured to claim against. This is why we can help you to claim if you were hit by a French HGV, as your claim will be settled through this green card system.

What Should I Do If I Am Involved in A Collision with A Vehicle Registered in France?

Most of the things you have to do when hit by a French HGV are absolutely the same as you would in a crash with any other nationality of driver. One of the most important and pressing things is to get yourself medically checked out. Not only should you do this for your own health’s sake, but for the sake of any claim you’re likely to make. You will need some records of the medical issues you’ve faced because of being hit by a French lorry, and you will likely need treatment in most cases. Whether it is the GP or the hospital, make sure to get looked at as a matter of urgency.

You should also inform the police and get as many details as you can from the driver. Whilst most French drivers speak fairly good English, some may not so you might be best getting them to write down their details as well as their registration number. Another good thing to do is make sure the plates for the cab as well as the trailer are taken down. Sometimes these have different registrations. Also note down contact information from those that have been witness to the RTA, as they could provide evidence going forward. If you are able, or if someone else that is there is able, then taking pictures of the crash area would also be wise.

Finally, when the dust settles, but within the 3-year personal injury time limit, you should contact us for free legal advice and to start your hit by a French lorry claim. We are on hand to answer any queries and to provide free advice – so you won’t lose out anything by calling us.

What Happens If the MIB Can Not Confirm the French Vehicle Is Insured?

In the event that the Motor Insurance Bureau cannot properly confirm whether the vehicle that hit you was insured to the standards required by the green card system, then you might be worried that your claim would not result in a payout. However, you should not be worried about this. Where the driver is untraceable, or the vehicle’s insurance status cannot be clarified, your claim can be settled through the Guarantee Fund under the agreement on uninsured drivers that exists as part of the MIB.

Whiplash Injuries Caused by A Collison With a French Truck, Lorry, Or HGV

If you’ve ever suffered whiplash, you’ll know that while some class it as a fairly minor injury, it certainly doesn’t feel like one. If you’re wondering ‘can I make a claim if hit by a French driver and I got whiplash, then you’d be well within your rights to do so if it was someone else’s fault. Foreign lorry drivers causing accidents often lead to whiplash injuries, and the force of a crash in any circumstances can move the head back and forth quickly, stretching and straining the soft tissues of the neck. This usually resolves on its own but can cause an awful lot of pain and lead to you having time off work, which could mean you lose out on income. This lost income can be included in a hit by French HGV claim for compensation.

I Was Hurt in a Traffic Accident with An HGV Or Lorry in France, Can I Claim Compensation?

Visited France on business or on holiday and been hit by a French Lorry? It may still be possible for you to go ahead with an accident in France claim. If you’ve booked a package holiday, allowing you to claim as part of the package holiday regulations of 1992 this can be a way to claim.

However, even if you have not booked a package, and are injured on the French roads by a French driver, you may still be able to make a valid road accident in France claim. Speak to our Legal expert staff to get an answer on whether you’re in a position to lodge a claim with a personal injury solicitor.

How Much Compensation Could I Claim If Hurt in A Crash with A French Lorry Or HGV?

An accident with a French vehicle, no matter what the size can cause a range of injuries to you, both in terms of physically and mentally. While we have covered numerous areas of injury to the body here, calculating amounts for mental trauma is also important.

Can’t see your area of injury of have questions about mental trauma payment amounts after being hit by a French HGV? Call us to discuss the specifics of your French truck incident and we can go through some details before advising you of common settlements for the types of injury.

Whether you’re suffering with complex, life changing injuries, or have minor injuries, you’ll want to be able to launch your hit by a French lorry claim without having to shell out huge amounts of money straightaway. The good thing is, you don’t with no win no fee action, and the panel of solicitors we provide all work to this rule. When you receive your compensation, your legal fees will be deducted from it, whilst in the unlikely event that your case is turned down for compensation, you won’t be in debt to your solicitor at all. We’re always happy to let you know more about this process, so just call us to ask us anything you like.

If it’s time to begin a claim for being hit by a French HGV, then it’s time to call Legal Expert on 0800 073 8804. Not only can we go over all the processes with you and let you know whether your situation warrants a claim, but we can start one for you today by providing a personal injury solicitor with the dedication and experience to bring your case to a successful conclusion. We’re ready to hear from you any time.

Whilst we feel we have covered the most important points about claims concerning being hit by a French lorry, if there is something you feel we have missed covering, or if you want to learn more about types of car crash injury, these links may help.

Lorry and HGV Claims – If you’ve been injured by being hit by a French HGV you’ll find details of injures and claims here.

More about No Win No Fee – We’ve produced a guide covering this form of legal action and how to make a risk-free personal injury claim.