£200,000 Compensation For A Knee Replacement

Legal Expert work with specialist no win no fee solicitors from across the country to deliver the highest quality legal services to claimants in personal injury cases, securing them the compensation (such as for a negligent knee replacement) that they are entitled to. No matter the injury you have suffered as a result of an accident which was not your fault, or negligence, our 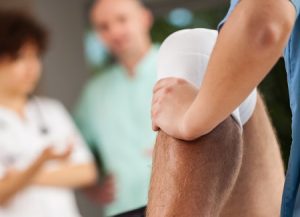 team of specialists can help.

At Legal Expert the specialist legal solicitors we work with have helped people from across the country who have had NHS misdiagnosis complications to recover the damages they are owed. To learn more about this case study, read below.

Whilst most of the thousands of people who are treated by the NHS on a daily basis having what are considered routine treatments, such as a NHS knee replacement will have an excellent experience, this is not always the case. NHS misdiagnosis compensation claims can be brought against the NHS where it can be shown that they have failed to correctly diagnose a condition or give an accurate prognosis. In order to bring a case such as this,claimants and solicitors need to show that the healthcare professional was liable and at fault, in that they failed to correctly carry out their duties in some way, and that this was the cause of the injury, disease or other condition suffered by the claimant.

In the case of a knee replacement complication, such as in our case study, we can see that the initial knee replacement lead to a condition which occured several years later, but was attributed to the way the knee replacement was performed and was treated as a case of NHS medical misdiagnosis.

Immediately after the knee replacement was carried out the claimant noted that they were in greater pain than expected. Doctors carried out an X-ray and found a fracture in the femur above the replacement knee joint. A second operation was then carried out to fix the fracture with a plate and pins.

Two years after the knee replacement the claimant had a fall. They suffered a further fracture to the same leg, just above where the metal plate was fixed. The claimant had further surgery to correct this fracture as well.

A relative acting on behalf of the claimant approached a no win no fee solicitor to make a knee replacement compensation claim, alleging that this initial surgery was the cause of the claimants subsequent fractures as well as the extended knee operation recovery time.

Solicitors acting on behalf of the claimant sought expert medical evidence to support the claim. They looked at the circumstances around the claimants initial assessment and the surgery, as well as taking things such as knee operation recovery times into account. They stated that the surgeon who performed the knee replacement was negligent. The claim alleged that the knee replacement compensation should take into account several factors.

These were that the surgeon failed to take into account the existing deformity in the claimants leg. That they had also not angled the surgery correctly to avoid notching the bone, which can make fractures more likely and that they had failed to take the steps necessary ensure the femur would be stable, preventing the second fracture. The expert identified several ways in which this could have been achieved either during the knee replacement or at the second round of surgery.

Initially the hospital did defend against the claim and said that the claimants existing leg bone deformity had been taken into account in surgical planning, as well as saying that the surgery had been performed correctly. They went on to argue that the knee replacement surgery was highly complex in this case and that sone bone notching was both necessary and even unavoidable. Further they argued that the initial fracture was caused by the deformity of the claimants bone and the complexity of the surgery undertaken, and that there was not NHS medical misdiagnosis in this case. They also denied that the second fracture which occured two years after the initial operation was linked to the surgery, sighting the bowed femur and fall as the cause of the fracture. They also noted that after a total knee replacement, fractures are a high risk.

Counter to the the claimant alleged that they deserved compensation for the total knee replacement. The claimant still suffered from knee pain a lot fo the time and they the joint was prone to giving way when walking. This also restricted her ability to walk. As a result of this and other existing conditions, the claimant was forced to give up work and subsequently developed depression.

The defence argued that leaving work was the result of other existing conditions and the depression, rather than the other way around, arguing that the defendant had already left work before the initial knee replacement surgery.

The case was taken to court with a date fixed. However, two months before the court case the defendant settled and £200,000 in knee replacement compensation was secured for the injury itself, as well as pain and suffering, the inability to work, loss of earnings and other costs.

At Legal Expert we work with specialist no win no fee solicitors across the country to help people make a knee replacement compensation claim after they have had an accident or injury which was not their fault. No win no fee services are often also known as a Conditional Fee Agreement. These contracts work by setting out the services and work that the solicitor will provide to the claimant, as well as detailing the payment terms and structure. Typically, no win no fee means that if a solicitor does not win a case, the claimant won’t have to pay a penny. There are not upfront fees or costs and no ongoing charges, instead the solicitors fee is deducted as a percentage of the final compensation which is awarded, in this case it would be less than 25% of the knee replacement compensation received.

Across the country no win no fee solicitors help people to secure compensation that they may not otherwise have been able to get. The misdiagnosis compensation amounts a solicitor can secure for a claimant depends on the nature of the injury, as well as costs that the claimant has incurred. To start your knee replacement or other compensation claim, talk to Legal Expert today.

Start your knee replacement compensation claim today and recover the damages which you could be entitled to claim by talking to the specialists at Legal Expert. We help claimant across the country to claim the compensation that they are entitled to.

Legal Expert ensure that we provide claimants with all the relevant information and advice about their claim and the claims process to help people make a successful claim. Our panel of specialist legal solicitors have as many as three decades of personal injury claims experience. Find out more about starting your claim by calling us today on 0800 073 8804. You can also email Legal Expert about your case at info@legalexpert.co.uk. Finally you can also contact us via the chat feature on our website. Start your claim today.

Fractured And Broken Bone Claims
If you have had a fractured or broken bone and need to make a compensation claim, view our guide to see how much compensation you could be entitled to.

Knee Replacement
Practical information on what to expect if you need a knee replacement with this handy guide from the NHS.