What Amount of Compensation Can I Claim For Flight Accident Claims?

Air travel is, according to reports, the safest mode of transport, and many people fly without incident many times a year. Whether you are going on holiday or travelling for business, you put your trust in the airline, the aeroplane and the staff to keep you safe, but sometimes accidents do happen. In this guide, we run through how to establish fault in an aeroplane accident, the types of injuries that may be sustained and also how much compensation could be due to you if you have suffered an in-flight injury.

A Guide to our flight accident claims

Flying is something many of us have to do, year in, year out if we wish to travel abroad or even domestically. Whether you are a business or leisure traveler, you would likely look forward to getting where you need to go quickly and efficiently and without injury. According to the government’s aviation statistics, however, this is not always the case. In 2016 alone, 29 casualties occurred as a result of accidents in UK airspace that involved UK registered aircraft. Whilst some of these incidents were minor, there were fatalities in some cases, although we cannot comment on who was at fault for these incidents as this data is not available. However, claims against airlines are made each year for people injured in flight. If your airline, the aeroplane manufacturer, or someone else was responsible for an accident causing injury in flight, then you should be able to claim flight injury compensation – and we at Legal Expert can help make that happen. Simply read below to find out all you need to know, along with plane crash settlement amounts, typical injuries sustained on aeroplanes and the Montreal Convention for personal injury, which governs claims for air injuries.

What constitutes a flight accident? 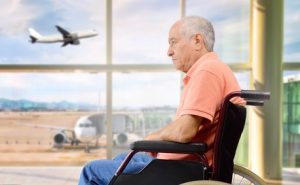 What is the Montreal Convention?

When pursuing flight injury claims, you may hear about the Montreal Convention 1999. This is a treaty signed by multiple countries, including the UK, that protects passengers in flight allowing them to be compensated by the airlines should they have been injured by or during a flight. Passengers should, no matter whereabouts or in which country the injury occurred, be allowed to make their claims in their home nation, whether they have suffered injury from falling baggage or objects from overhead lockers, unsafe transfers by ground staff or emergency evacuation where proper procedure was not followed.

What accidents can occur on a flight?

According to UK Courts, in a case that involved British Airways, an accident can be deemed anything that is not the expected usual operation of an aircraft. There are several different ways in which an accident can happen, whether through:

Whether your injury has been caused by any of those factors mentioned above, or through another factor, then it is entirely possible, if it wasn’t your fault, for you to make a claim for flight accident compensation. This is where Legal Expert can help. We can provide for you a solicitor that covers your area and can assist you in making a claim.

I had an accident while boarding an aeroplane – can I make a claim?

Boarding an aircraft should be a thing we do without incident, and when it is not, there are various accidents that can occur. Whether the steps were not properly secured, there were slip, trip or fall hazards that were not cleared up or you have been injured by damage to the boarding tunnel, if you weren’t to blame for the accident boarding an aeroplane, you’re likely to be able to be awarded compensation for your injuries. There are various different injuries that can be caused boarding an aircraft including broken bones, strains and sprains, muscle damage and worse. If you have been involved in such a situation, then it would be wise to speak to us to see how we can help you claim.

I slipped while disembarking a flight – do I have a claim?

If you’ve had an accident disembarking an aeroplane, you will need to be able to prove that you were not to blame for it. For example, if you were rushing and fell, tripping over your own feet, it would be likely that, unless you were rushing due to an emergency with the aircraft, you would not have a claim. If, for example, you slipped on a pool of water that had not been cleaned from the ramp or steps, then you would likely have a claim. Call our team and we’ll be sure to talk you through the reasons why you have or don’t have a valid claim. We can then, if you do have cause, provide you with a solicitor to help you.

Luggage fell on me on an aeroplane – what should I do?

One of the more common occurrences on an aircraft that can cause injury is items that have not been properly secured or those that have fallen due to issues with the overhead storage lockers popping open. Luggage falling on the head can cause a variety of problems and can even knock someone unconscious if they are heavy enough. Should this have happened on your flight and you were left with an injury, then we can help begin the fight for compensation against those responsible.

Burnt on aeroplane food or drink – who is responsible?

Whilst the quality of food on an aeroplane is not always that of a good restaurant, it usually comes hot, and this can cause accidents in flight. If you have been burnt by foods served on an aeroplane, if you were not advised that they were hot, or they were spilled on you, then you may have suffered burn injuries that were not your fault. These can cause scarring and visible damage that can last for a long time to come. In flight injuries on airplanes compensation can help pay for treatment for the injuries to reduce the visibility of scarring, and can also compensate you for pain you have been through.

Injured by aeroplane seat – What do I need to do?

Seat damage can happen in an aeroplane for a variety of reasons. Perhaps the seat was not checked for damage and there were sharp parts protruding that have caused injury, or maybe the seat mechanism was faulty. Whatever the reason you were injured by your seat, as long as it was not from improper use, it is likely that you could claim seat injury compensation.

Injured by trolley mid-flight – Can I still claim?

We have all laughed at those comedy films that depict people being bashed by hostess trolleys, but in reality, they can cause nasty injuries that can cause damage and pain for years to come. If you’ve been hit by a trolley midflight, either because it was left unattended or it was pushed into you, then you may be able to be compensated for your injuries with airline injury compensation claims. Speak to our team; we are sure to be able to advise you on what to do next.

Injured in a plane crash – who do I claim against?

The stuff of nightmares, a plane crash is often the nervous traveler’s biggest fear, but when it does happen, either due to pilot error, mechanical failure or any other reason, the injuries can be catastrophic and are not always limited to the physical. Mental and emotional trauma can cause loss of quality of life and some people will never travel via air again after such an incident. If you or a loved one has been injured in a plane crash or collision, either in the air or on the ground, then speak to our team, who will offer guidance on what to do next.

Fatal plane crash – what should dependents do?

It does not happen often, but when it does, plane crashes causing fatalities are highly publicised. Often, in the newspapers, the family of the deceased are mentioned, but what is not often mentioned is the emotional and financial trauma that does not go away long after the story has been printed or broadcast. Dependents of those killed in accidents on aeroplanes can make claims for compensation that may cover funeral costs, as well as offering financial support for those who are left without household income due to the accident. There are, however, limits on the time allowed to make a claim. In the most part, loved ones can claim up to 2 years after the accident, but it is wise to pursue a claim as soon as possible after the accident to help relieve the financial burden sooner.

What type of compensation is it possible to claim for flight injury?

The types of payout that make up a compensation claim can include the following:

If you’ve incurred other costs directly due to the flight accident, then speak to our team to see if you can be recompensed as part of any settlement.

How much flight accident compensation would I get?

When it comes to the amount you’re likely to receive for compensation it depends entirely on the severity and prognosis of your injuries. Airline compensation for death of a loved one will be really very different to those for a burn suffered on an aeroplane. Below is a table covering a range of injuries to give you some idea of compensation amounts. You may not see your specific injury/ies here but if you don’t it doesn’t mean they will not be covered. Simply call us to get a general overview of typical payouts for what has happened to you.

No Win No Fee flight accident claims – can I make one?

Claims against an airline can be made as no win no fee. This works by using some of the settlement given to you once the case has completed to cover the solicitor’s fees. This is usually set at an agreed amount before you sign anything, so you will know how much of the settlement you will receive. Legal Expert’s friendly and fully trained team will explain all the details you’d need to know if you were to use our service to make your flight accident claims.

Providing you with a solicitor that is perfectly placed to handle your case is something that not a lot of people can do. Here at Legal Expert we have the ability to provide experienced solicitors that have experience in this area of personal injury, allowing you the peace of mind that you are having your claim dealt with by someone who knows exactly what they are doing. We have helped many people claim compensation for injuries ranging from burns to loss of a loved one and care about the service we offer. We take the time to get to know what has happened to you and help you by informing you of all the facts, empowering you to make a decision on the best course of action to take for you.

Talk to us about launching flight accident claims

Whether you have questions about whether your claim is a valid one, want to know more about the Montreal convention, need to know how to go about making a claim or are ready to start one, then all you need to do is get in touch. You can reach us by phone – 0800 073 8804, via our form online, or by emailing info@legalexpert.co.uk to ask us anything about flight accident claims, and we will do our utmost to provide an answer or solution.

The AAIB provide reports on incidents that have happened in the aviation industry. This might be of interest if you are looking to find out about other events that have been reported.

The HSE aim to answer questions that are commonly asked about air transport safety. Read their page to find out more.

Our guide on claiming no win no fee should inform you further about this type of case. This may apply to you when making flight accident claims.