How To Claim Compensation Against Polish Lorry / HGV Driver? – View Our Guide

Can I Claim Compensation If Was Hit By A Polish Lorry Or HGV?

Have you been hit by a Polish lorry or otherwise involved in a road traffic accident with a HGV, lorry, or truck from Poland? If so, find out how much compensation you could be entitled to claim for any injuries sustained in our comprehensive guide below as well as how to make a no win no fee compensation claim. 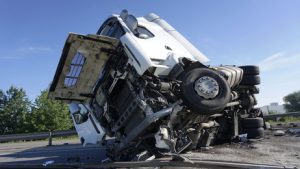 Today it can be difficult to travel around the major roads in the UK, whether motorways or ‘A’ roads, without encountering haulage vehicles (trucks, HGV’s, and lorries) from outside the UK. If you are injured as a result of an accident with a foreign vehicle which was not your fault, would you know what steps you should take, and whether you would be able to make a compensation claim? It should be noted for the purposes of this guide that the nationality or residence of the driver does not matter in this claim, it is the country of registration for the vehicle which does.

In this guide we will look at whether and how you can make a compensation claim after being hit by a Polish HGV, as well as how much compensation you could be able to claim.

A Guide To Compensation Claims Against Polish Lorries Or HGV’s

With so many foreign registered HGV’s, lorries, and trucks driving on the UK’s road network there is a reasonable chance that if you are involved in a crash with a HGV, that it is registered in or from outside of the UK. Previous reports have shown that each year as many as 18,000 road traffic accidents are caused by drivers or vehicles from outside the UK. Differing speed limits, road conditions, and attitudes to driving could all contribute towards this figure. Constant changes in the way a driver needs to act can especially affect those in haulage.

How To Claim Compensation Against A Polish Lorry / HGV Driver

If you are involved in an accident with a foreign vehicle, such as being hit by a Polish lorry, you could very well worry about whether or not they will have insurance in place and if you can claim compensation for any injuries. If you have been hit by a Polish HGV you should act in the same way you would if the vehicle was registered in the UK. All vehicles on the road in the UK should be insured. If you were involved in a hit and run accident with a Polish lorry, we can still help you to claim compensation. Wherever the driver or vehicle which you were involved in an accident with came from, we could help you to make a personal injury claim.

What Is A Polish HGV/Lorry?

Put simply these are any type of large or heavy good vehicle such as a lorry, truck, HGV which is registered in Poland. These might include large goods vehicles (LGV) and heavy goods vehicles (HGV’s). These vehicles are defined under both UK and EU law, requiring specific license to drive them. Any commercial vehicle which has a gross tonnage of 3,500kg or more falls into the category. As such, your foreign vehicle road accident could have been with a box van, refrigerated truck, flat bed truck, or any other type of large goods vehicle.

If you have been involved in an accident with a Polish lorry or wagon, please contact us today.

The issue of proving vehicle insurance when crossing borders dates back to just after World War two. The International Green Card system was set up to help better facilitate the process of vehicles crossing international borders. Today the United Nations system is recognised in 47 countries around the world, including right across Europe. The purpose of the system if to help vehicles (such as good vehicles) easily move across international borders. It is also designed to help anyone involved in an accident with a foreign vehicle, such as people who have been hit by a Polish driver or vehicle registered in Poland.

Neither the Green Card nor the Green Card System offers vehicle insurance. However, it does function as proof that the vehicle and driver have met any legally required minimum insurance standards, such as having third party insurance in place. This can be essential in making a compensation claims.

If you are hit by a Polish HGV or lorry, it should be covered by the Green Card system. This means that you can make a compensation claim for any losses you have suffered as well as harm caused to you. You can find further information on this scheme at the Motor Insurance Bureau website.

Immediately after your accident with a Polish HGV or lorry, you should get as many details about the driver and vehicle as possible. Take down the registration number, the name and contact details of the driver and those of the truck operator, as well as any other relevant information you can think of. If the driver does not speak very good English, try to obtain what information you can. You should also ask for the contact information of any witnesses to your accident. Their statements could be important later when making a claim.

If you can, photograph the scene of the accident, and damage to bothe vehicles. Note down the time and location of the accident. This can also be useful to the solicitor later.

If the driver does not stop, or if some details are missing it may also be necessary to contact the Motor Insurance Bureau to confirm the vehicles insurance policy is in place and that you can make a claim against this.

What Will Happen If The Polish Drivers Insurance Can Not Be Confirmed By The Motor Insurance Bureau?

If you have been in a crash with a Polish lorry and the MIB can not confirm the vehicles insurance provider, or their representatives in the UK, it is not recommended that you pursue a case through the County Court. Doing so will mean increasing your costs and bringing a claim outside the courts jurisdiction. Instead claims can be made through the MIB or the Uninsured Drivers Agreement

Whiplash From An Accident With A Polish Registered Vehicle

Whilst an impact from a lorry could cause a variety of different types of damage to your vehicle and injury to you, whiplash is one of the most common of these which we see people make personal injury claims for. Whiplash can present with several different types of symptom, but the main one is pain through the neck caused by the muscles being strained to move beyond their usual range of motion.

If you have suffered whiplash as a result of a road traffic accident involving a foreign vehicle, namely a Polish HGV, we can help you to claim compensation.

I Was injured In a Vehicle Crash With A Lorry In Poland Can I Claim Compensation?

Whilst being involved in road traffic accident involving a foreign driver, i.e. a lorry or HGV driver in Poland is unfortunate, if you are visiting Poland you could be involved in an accident with a Polish HGV. If you have been hit by a Polish HGV whilst in Poland we can help you to claim compensation for any resulting injuries. You will need to report the accident to the Polish police in the area where it happened, as well as following all of the usual steps that you should follow after being injured in an accident. Remember to keep the receipts for any medical costs you have had to pay for.

In the table below we have included examples of some of the most common injuries which people suffer if hit by a Polish lorry, or similar road traffic accidents involving a foreign vehicle. Please note that the amounts of compensation listed are just examples taken from the Judicial College Guidelines and the amount of compensation you could receive may differ.

There will be other types of compensation, such as that for medical expenses, property damage, or loss of income which may also be included in your final settlement.

No Win No Fee Polish Lorry Or HGV Accident Claims

No win no fee agreements are also sometimes known as conditional fee agreements. They are a way for those without the funds to do so to take legal action to get the compensation they deserve after being injured in an accident, such as being involved in a car accident with foreign driver or vehicle. They enable people to still get the legal advice that they need, and to make a claim, without their financial situation being a barrier.

When you are ready to make a compensation claim you can begin the process by contacting our specialist road traffic accident claims team. You can call us on 0800 073 8804 or put the details of your claim in an email sent to info@legalexpert.co.uk.

However you get in contact with Legal Expert please do so today, our team are waiting to answer your call.

Have you been injured whilst travelling to Poland for a holiday or for work? If so, you could make a compensation claim for any injuries suffered.

Have you been hurt in a road traffic accident involving a foreign vehicle, such as being hit by a Polish car? If so, you can find further information here.